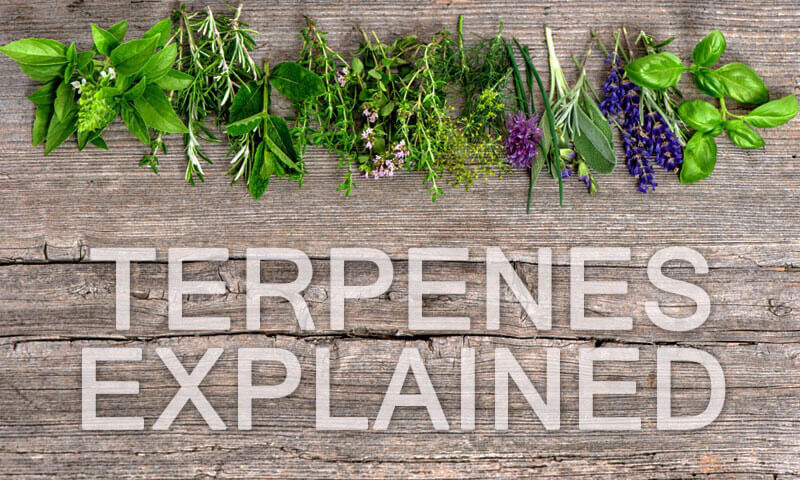 Terpenes are components of the essential oils and resins found in many plants, and especially in cannabis plants. Terpenes synergize with and modify the effects of THC and other cannabinoids. We are only beginning to understand their effects and interactions with the phytocannabinoids in cannabis and the endocannabinoids in our bodies.

From over 100 terpenes possible in the cannabis plant, here are some of the more common terpenes present in cannabis.

Beta-myrcene is found in cannabis in abundance, especially in the tropical sativas, and enhances absorption of cannabinoids. It smells like cloves, citrus and fruit. Effects include analgesic, anti-inflammatory, muscle relaxant, anti-depressant, antibiotic, and blocks certain carcinogens such as aflatoxin B. High levels of beta-myrcene are found in the cannabis strain White Widow and probably in Neville’s Haze.

Limonene smells like oranges and is abundant in citrus fruits. Effects include relaxation, enhanced alertness and focus, anti-depressant, anti-cancer, antibiotic and anti-fungal. Helps with absorption of cannabinoids. Limonene is abundant in the strains Lemon Skunk and Big Bang.

Beta-caryophyllene, a terpene also known as BCP, binds to the CB2 receptor site, and thus is the first known food cannabinoid. It is not psychoactive. Most cannabis strains contain large amounts of beta-caryophyllene. It is analgesic and anti-inflammatory.

Beta-pinene can increase mental focus and energy, and enhances memory, as well as acting as a bronchodilator. It has the familiar pine tree odor. A related terpene, alpha-pinene, is found at high levels in Super Silver Haze and possibly in Great White Shark.

Terpineol smells floral, like lilac, apple and orange blossoms. Terpineol may be the cause of couch lock effect after smoking some strains of cannabis, it acts as a sedative. Helpful for insomnia.

Borneol smells like menthol or camphor, pine or woody. It is calming, sedative, relaxing, and is used for recovery from stress or illness. Borneol is likely abundant in the cannabis strain Silver Haze.

Delta-3-Carene has a sweet, pungent, woodsy scent. It may contribute to dry eyes and mouth from smoking certain strains of cannabis.

Linalool has a sweet, floral scent. Linalool is strongly sedative, especially when inhaled, and may lead a person into sleep. It may be anti-cancer.

1,8-Cineole is spicy, camphor, minty and refreshing. It is helpful for circulation and pain relief, and the effects are thought-provoking and stimulating.

Sabinene has a spicy scent and may act as an anti-depressant. It is found in high amounts in Super Silver Haze and in Arjan’s Ultra Haze #1.

Terpenes are the next wave of Cannabis byproducts that are sure to be at the forefront of scientific exploration and consumer interest. We hope you learned of some terpenes that may benefit you.